Prime Minister Justin Trudeau answered questions ranging from local concerns about public transit to tabling new federal pot legislation at Tuesday night’s town hall in Sherbrooke, Que., and he answered them all in French — because, he said, “we’re in Quebec.”

A woman asked in English what would be done to help Anglo-Quebecers seeking mental health services when those services are only available in French.

“Thank you for your use of both official languages,” Trudeau replied in French.

“But we’re in a French province so I will answer in French,” he answered, as the woman grew visibly annoyed.

“All people who speak one of the two official languages should feel comfortable across the country,” he said, in French, while highlighting the federal government’s investment in health.

Trudeau answers English question in French because ‘we’re in Quebec’0:52

Trudeau spoke exclusively in French, despite a half dozen English questions.

Some in the crowd seemed surprised by the prime minister’s decision.

But recent Afghan immigrant Abdullah Hakiemie was too excited to meet his hero to be fazed by a French answer.

“He supports every human being on this planet, and I’m very happy to be a Canadian and to support Mr. Trudeau, and I will support him in every possible way,” said Hakiemie.

‘We’re all so diverse’

Later, a woman wearing a hijab read from notes, in broken English, asking on behalf of all Canadian Muslims if Trudeau would consider giving them a public holiday for Eid al-Fitr, the holiday marking the end of the Islamic holy month of fasting, Ramadan.

He answered in French that Canadians’ differences are their strength and that embracing those differences enriches our country — whether they be historic differences between the French and English, or more recently with refugees being welcomed into Canada.

“Here in Canada, it’s hard to call a certain group ‘other,’ because we are all so diverse,” he said.

He did not comment on adding a national holiday to the calendar. 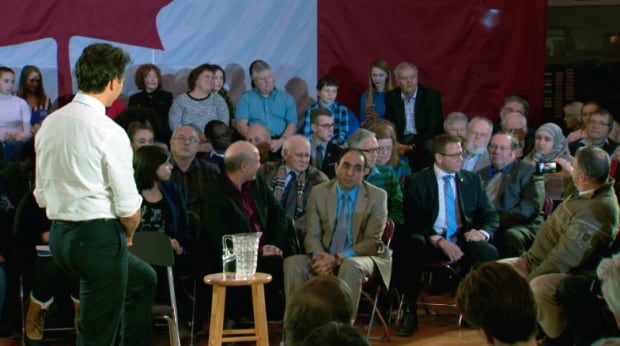 A woman asked Prime Minister Justin Trudeau if he would make the Muslim holy day of Eid al-Fitr a holiday. (CBC)

Meanwhile, Guillaume Gagnon, who works in marijuana research and lobbying, asked for details about the tabling of new marijuana legislation due in the spring.

Trudeau said he aims to introduce new law which would make it harder for youth to get access to marijuana.

He said the legislation would aim to eliminate the black market and criminal elements from the buying and selling of marijuana.

“Be patient. Changes are coming,” he told the crowd of roughly 1,000 people.

Most of the attendees who asked questions came from Sherbrooke and its surrounding cities, but some came from as far as Lac-Mégantic, about 100 kilometres east.

There was concern from members of the audience over how Canada’s economic relationship with the U.S. would be affected by the incoming Trump administration.

President-elect Donald Trump promised voters he would bring jobs back to the U.S., with talk of increased border tariffs on imported goods — stoking fears of damage to Canada’s import and export markets.

Trudeau stressed that his government would work with the incoming administration to protect the working class on both sides of the border.

“Our economies are thoroughly integrated. Many industries in the U.S. benefit from strong trade ties with Canada.”

Second English question on relations with USA under Trump. Answer in French that tariffs on imports not in the best interest of USA. #polcan

With regard to preserving Canada’s supply-management dairy industry which was recently targeted by U.S. dairy groups, Trudeau said he would strongly defend Canadian farmers and Canadian economic interests.

He highlighted the investment of $350 million into Canada’s dairy sectorafter signing the Canada-EU trade deal, which created extra competition from foreign cheese imports.

Trudeau is taking the pulse of Canadians in a series of town hall meetings across the country, opting to skip the World Economic Forum’s annual global political and business conference in Davos, Switzerland, an event he attended last year.

Sherbrooke was the first Quebec stop on the tour, which started last Thursday in eastern Ontario.

Earlier Tuesday in New Brunswick, Trudeau fielded questions on a whole range of issues, including the troubled Phoenix payroll system, marijuana policy, protection of the environment, job creation — and what Trudeau’s daughter wants to be when she grows up.

Trudeau will be at Bishop’s University in the province’s Eastern Townships on Wednesday morning, followed by a stop in Granby, Que., at 11:40 a.m.