Recent remarks on social media by the Minister of Education and Early Childhood Development, Dominic Cardy with respect to his preconceived opinion of the Anglophone Rights Association of New Brunswick (ARANB), are disappointing at best. See the comments below.

This misinformed public branding of ARANB, (a group in NB representing concerns from the Anglophone perspective), by a person who is supposed to represent the people of NB as an open-minded and informed government official, is completely unacceptable.

The basis of ARA’s position from our beginning in 2015 has been the acceptance of the principle of bilingualism in NB. We have advocated for fairness in participation in our public service. Meaning, the public service, should be reflective of the community they represent.

ARANB advocates on behalf of our members and supporters who believe unilingual English, unilingual French and bilinguals have a rightful place in New Brunswick and within our government. We want our families to have the opportunity to live, work and pay taxes in New Brunswick for years to come without restrictive implementation of language laws acting as barriers to them attaining their career goals in the public and private sectors right here at home.

ARANB has every right as residents and taxpayers to sit at the table and express the concerns of our members and supporters and to offer solutions to those issues during the Official Languages Act review and at any other time. Now is time for everyone to bring the issues to the table and start discussing resolutions that work for the benefit of all New Brunswick.

Minister Cardy’s public declaration should disqualify him from any participation in the 2021 Official Languages Act Review and he should be removed from is position as Minister. His statements are unacceptable and inappropriate as Minister of Education and Early Childhood Development. It is our education systems that set the very groundwork for the future of Anglophones and Francophones in NB!

All trust in this Minister has been broken, and a public apology to all New Brunswickers is warranted. 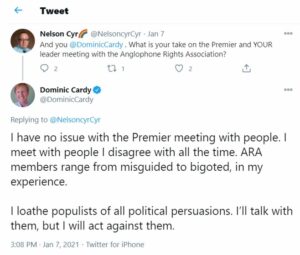