Pauline Armstrong grew up in Bathurst and can understand her friends and neighbours when they speak French, but has a hard time having a meaningful conversation in the language, even after years of retail work.

“It’s in my head somewhere but some of the new words, I need to keep it fresh in my head,” she said.

Armstrong posted on Facebook about creating a French conversation group to help improve her language skills. She soon found out she’s not alone. 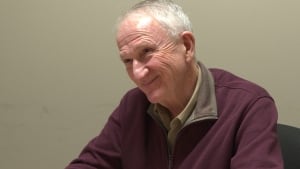 Charles Ramsey, a Bathurst native who lived in Fredericton for 50 years, says he feels “disappointed” in himself for not keeping up his French. (Bridget Yard/CBC)

“People said ‘OK, yes, I’d like to attend. People from all ages,” she said.

Armstrong formed a French conversational group, which now meets once a week at the local recreation centre.

Several native French speakers have volunteered to moderate the group and their conversations so those less confident will have a friendly face to speak to and correct them.

Several members have expressed to Armstrong their discomfort speaking in French as a second language and want to overcome their shyness.

‘That’s my number one thing. I don’t want to make a mistake. People might laugh at me.’– Pauline Armstrong

“But they’re not laughing at you. It just does sound funny when you make mistakes.”

When Charles Ramsey was growing up in Bathurst more than 50 years ago, the city was predominantly English. Rarely would a native English speaker need to use a second language.

He recently returned to the city after living in Fredericton and found times had changed.

“I’ve always been a bit disappointed in myself for not being able to keep my skill up after I needed to use it daily and I lost the capacity to speak it fluently,” said Ramsey, who worked for decades for the provincial government.

“Now that I’m in Bathurst, I have the opportunity to speak it again.”

‘I would suggest that discomfort prevents me from using it.’– Charles Ramsay, member of French conversation group

Ramsey attended the first conversation session at the KC Irving community centre to brush up on his skills and deepen his connections with predominantly French speakers.

“Almost anytime I get to use it now, I feel uncomfortable using it and I would suggest that discomfort prevents me from using it.”

After challenging himself to use his second language for an hour, he said “My brain was a bit cramped.”

Armstrong, too, found the session challenging.

“There’s how many verbs?” she asked, as she practiced with Ramsey.

“If my French professor were listening, she would say ‘No,no, Pauline,’  because I make up my own verbs and you can’t do that.”