The Gallant Liberals may have thrown the dual-school-bus controversy back to the province’s seven school districts, but that doesn’t mean English and French education councils will start sharing bus routes anytime soon.

On Wednesday, the government abandoned its legal position that the Constitution requires it to provide two separate school bus systems, one for anglophone schools and one for francophone schools. 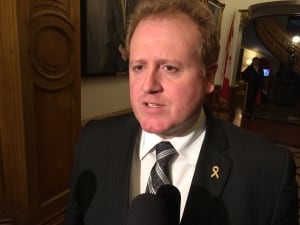 Education Minister Brian Kenny announced Wednesday the province will allow school districts to decide whether students from the English and French school systems can share a bus. (Jacques Poitras/CBC)

It’s now leaving that up to the school districts to sort out.

“We believe they’re very well-placed to know exactly what type of realities, challenges and opportunities there are in their communities,” Premier Brian Gallant said on Thursday.

Education Minister Brian Kenny said while school buses are covered by the linguistic-duality provisions of the Charter and Rights and Freedoms, districts are free to sign agreements to share bus routes between English and French schools.

But will it happen? Don’t hold your breath, according to district officials in both anglophone and francophone districts.

“There are some efficiencies that can be found, sure, in the system, but it’s not as simple as just saying we’ll run one bus through that community and pick up both the anglophone and francophone students,” said Gregg Ingersoll, the superintendent of Anglophone School District East. 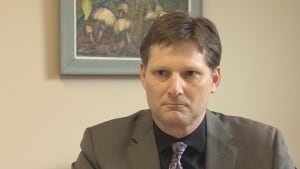 David McTimoney, the superintendent of Anglophone School District West, agreed. “It’s not something that we would see happen next week,” he said. “There are different factors at play.”

Among those factors, he said, is that any shared-bus arrangement “would need to be a partnership” with the francophone district covering the same area, whose council would have to agree.

And those districts say mixing anglophone and francophone students on their buses is a non-starter.

‘It’s not something that we would see happen next week.’– David McTimoney, anglophone west superintendent

They say it would violate their legal obligation to protect the minority-language rights of their students under Section 23 of the Charter of Rights and Freedoms.

The francophone school district in northeast New Brunswick has an official policy saying district officials cannot provide student transportation that is “in whole or in part not francophone.”

And the francophone district in the southeast passed a resolution earlier this year endorsing the principle of “linguistically homogenous” school busing.

Ghislaine Foulem, the chair of the northeast district, says Section 23 of the Constitution requires minority-language school systems to protect and promote the students’ language.

“If we ever tried to offer a bilingual service, I think we’d be violating the law and asking for a lawsuit,” she said. “It’s clear to us.”

Last year, there was a political backlash after the province told anglophone and francophone districts to stop sharing a handful of bus routes in Kent County.

Critics said it would save money if districts were allowed to share buses. But the Liberals said the province was constitutionally obligated to provide separate buses.

They eventually asked the New Brunswick Court of Appeal to rule on the issue. The court said last month it wasn’t convinced it should hear the politically charged case, and Wednesday the province withdrew it.

That leaves the constitutional question unresolved.

Foulem says her district council interprets Section 23 to mean they must provide “an environment that’s totally francophone when they’re under our jurisdiction,” including on school buses. “The law obligates us to do that.”

Even if francophone districts were willing to share routes, and even if it were clearly constitutional, Ingersoll says it wouldn’t be easy or straightforward. 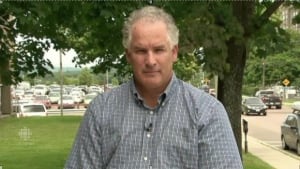 For example, in the town of Riverview, the anglophone east district buses its students to schools in Riverview.

“It’s not as easy as saying `one bus will pick them all up,'” he said.

With schools generally opening at the same times, a single bus might drop off some students too early or too late, he added. “We want to make sure we’re finding efficiencies, and not making it more complicated that it already is.”

Richard Landry, the chair of the francophone school district in northwest New Brunswick, says there are other pitfalls.

Until 2007, he said, a handful of anglophone students in the St. Francois area were riding along on a francophone school buses to the English school in Edmundston.

But when one of the students became a disciplinary problem on the bus, Landry said, the unilingual francophone driver wasn’t able to communicate with the child, so the district told the department it could no long offer the shared route.

Landry says his council hasn’t had a chance to ponder the province’s announcement “but we have to respect Section 23. That’s definite.”

Ingersoll said another obstacle is that the anglophone and francophone school districts use different software to crunch student addresses and develop bus routes, making it difficult to merge the data and draw up shared routes.

That obstacle may be eliminated by an “optimization” of school bus systems the Liberals promised in the February budget, including new technology to track bus locations.

“Definitely with the GPS technologies out there, we know where the routes are, so with computer automation and technology, we definitely could find some efficiencies in the fleet overall,” Kenny said.

Landry says that technology could let districts running near-empty buses to save money by finding cheaper ways to transport a small number of students to school.