The New Brunswick government is being urged to strengthen the education system, but one author of the recommendations is cautioning against yet another abrupt change or major overhaul.

Karen Power and Gino LeBlanc released their reports Friday that will form the basis for a 10-year education plan being developed by the Gallant Liberals.

Power’s report focused on the anglophone sector and acknowledged that many of the ideas “align with recommendations” contained in earlier reports dating back 25 years.

But she said it was important to avoid another major reform or shift in direction.

“With each election, provincial governments have made decisions and changed direction that affects student learning,” she said in her report. “I learned that the lack of continuity and evidence-based decisions as a province is perceived as a critical risk by those in and outside the province.” 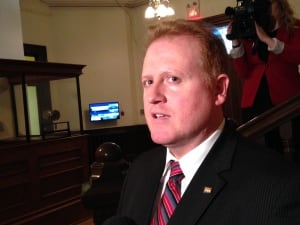 Power told reporters that’s why she is not recommending any big change.

“There’s a lot we do correctly in New Brunswick already,” she said. “We have a lot of things in place we need to build on.”

That includes a more student-centred approach but  “it doesn’t mean we have go off on a different path.”

Instead, Power calls for more formative assessments, a type of testing that allows a teacher to measure if students are grasping material and to adapt by changing their teaching method quickly, rather than waiting for test results at the end of the term or year.

She also recommends an “internationally competitive graduate profile,” a list of skills that a student would be expected to achieve by the end of Grade 12, so they know what to work toward.

Teachers and administrators “don’t want to see the government change the education plan every four years,” he said. “Let the teachers do the job the best they can.”

Power avoided wading into the controversy over the closure of small and rural schools. Last year saw district education councils vote on a wave of shutdowns, with more to come as a result of the Liberals establishing new criteria to trigger closure studies.

Power, a former school district superintendent, said she wasn’t asked to study that issue, but she said school culture is more important.

“Whether the school is small or large, it’s what the principal and the teachers are able to create in that building … I’ve seen it be successful in very tiny schools and very large schools.”

Education Minister Brian Kenny wouldn’t say what ideas stood out to him. “You’ve got to realize I just received the report … I think there’s a lot of good recommendations in there, but I’m not going to name them because there is a lot of information.”

But he said he’d look at them and promised the government will implement its education plan in time for the start of the 2016-17 school year in September.

But Crossman said school staffing is usually put in place in March for the fall, so it’s late now to be trying to implement a plan for this September.

LeBlanc also recommended that as early childhood education provided through child care centres becomes more integrated with the school system, it should come under the dual anglophone and francophone sectors.

The previous PC government of David Alward had started work on that goal, but some parents complained that it would mean an end to bilingual daycares where both languages are taught.

Kenny wouldn’t commit to that recommendation on Friday.