Posted on December 7, 2016 by Sharon Buchanan

The Liberal government is abandoning its constitutional court case on dual school busing and will instead leave decisions on student transportation to individual district education councils.

It’s a stunning reversal for a government that said last year it wanted the New Brunswick Court of Appeal to clarify whether dual bus systems for English and French school systems were required by the Constitution.

But the court said in a procedural decision last month it still wasn’t persuaded it should even hear the case at all.

Wednesday the Liberals said given that hesitation, they would abandon the reference case and instead let DECs decide for themselves on school busing.

‘It’s up to the districts.’– Brian Kenny, education minister

That means a francophone and an anglophone district could choose to share buses, Education Minister Brian Kenny told reporters.

“The districts were set up to have local autonomy,” he said. “It’s up to the districts.”

Kenny said the Court of Appeal clearly had “reservations” about ruling in the case. “I wanted to make sure that we provided clarity on this.”

He pointed out that DECs are made up of parents and representatives elected by parents.

Section 23 of the Charter of Rights and Freedoms guarantees minority-language parents the right to govern their own schools, so by leaving the bus decision up to education councils — the mechanism for that governance — the province can argue it’s complying with the charter, even if the councils decide to share buses. 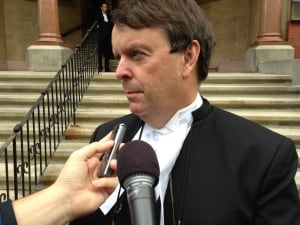 “It would be difficult for them … and if they would do it without justifying it under Section 23, they would open the door to a legal challenge.”

Doucet says he expects the new policy means nothing will change and the two busing systems will continue to operate. He pointed out all three francophone districts in the province have adopted resolutions opposing shared, so-called bilingual busing.

“So basically we’re just back to where we were a year and a half ago, before the reference was made to the Court of Appeal,” he said.

The Gallant government decided to send the dual busing issue to the Court of Appeal for a reference ruling last year, after weeks of controversy.

The tipping point came when then-Education Minister Serge Rousselle told the two school districts in Kent County, one English and one French, that their sharing of a school bus run wasn’t allowed.

That prompted a backlash and the Liberals decided to send the case to the courts, even though they were adamant the Constitution required them to provide two bus systems.

Kenny said Wednesday the new policy will allow the two school districts in Kent County to resume their sharing arrangement if the two education councils choose to do so.

Progressive Conservative Opposition Leader Blaine Higgs said “We’ll wait to see the impact of this policy, but if the districts will be given more decision-making power, we’d suggest they be able to decide the entry point for early French immersion. I know of at least two districts that would make good use of that power.”

Higgs has relentlessly criticized the Liberals over the last two weeks for deciding to move the entry point for French immersion from Grade 3 back to Grade 1.