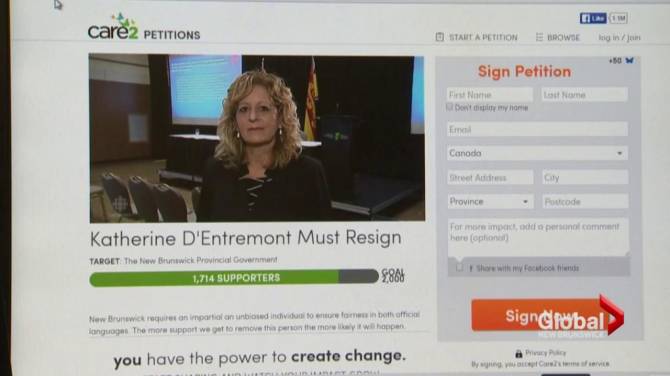 The New Brunswick Official Languages Commissioner Katherine d’Entremont is receiving a great deal of criticism on the heels of two Vitalite Health Network commissionaires losing their jobs for being unilingual.

Doug Dickinson and Ward MacDonald were both advised last Thursday they were being let go from their positions because they spoke only English.

“Ward MacDonald has been there five plus years, I’ve been there a year and a half,” explained Dickinson. “At no time were myself or Ward aware of a bilingual requirement for that job.”

Dickinson’s anger over the job loss has a lot to do with the fact that he was let go without being given any opportunity to change.

Since the story went public, people have been in an uproar over the treatment of the two employees, and more generally the Commissioner herself.

An online petition asking for d’Entremont’s resignation, with a goal of 2,000 signatures, has already passed its mark and continues to grow.

Many residents think terminating rather than training unilingual employees is not promoting bilingualism.

“This petition will just be another wake up call to the government to evaluate how this position is being handled,” Jordan Manzer said.

“If this is the way that’s going to be handled then we should be looking for someone who’s going to promote it in a positive way that brings all New Brunswickers together.”

“Duality is segregation and bilingualism is full inclusion,” said Gary Brown. “We as a province need to work together.”

The Languages Commissioner declined to comment on the petition