Premier David Alward’s Progressive Conservative government has introduced amendments to update the 2002 Official Languages Act, a package of changes that has been endorsed by the Liberal Opposition in the legislature.

Alward and Liberal Leader Brian Gallant took the unusual step of appearing together before reporters on Friday to underline that both parties support the bill. 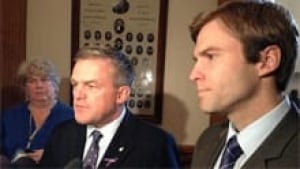 Most of the changes simply clarify issues that have been flagged as ambiguous over the years since the law was passed, with the exception of one major proposal about daycares, which has been put off for more study.

Among the amendments introduced:

Michel Doucet, a law professor at the Université de Moncton and an advocate for expanded language rights, said on Twitter that the legislation was “very disappointing” and amounted to “cosmetic changes.”

The bill stems from a mandatory 10-year review required by the 2002 law. Last year, a committee of Progressive Conservative and Liberal MLAs held hearings behind closed doors.

The MLAs issued a preliminary report in April and tabled their final report on Friday. In the report, the MLAs acknowledged that francophone groups had asked for a requirement that police officers be able to serve anyone in the language of their choice “immediately.”

“Although a completely bilingual police force is a worthy objective,” the committee wrote in its report, “it would be very hard to implement and practically impossible to meet.”

The committee also proposed that early childhood programs, including daycares, be brought under the duality provisions of the Education Act, though that did not make it into the amendments introduced on Friday.

The Education Act establishes two school systems in the province, anglophone and francophone, an  arrangement guaranteed in the Canadian Charter of Rights and Freedoms.

Provincial policy has increasingly been treating daycares as a part of the school system, putting them under the authority of the education minister and bringing in curriculum requirements for both French and English daycares.

When Official Languages Commissioner Michel Carrier proposed banning bilingual daycares in 2011 in favour of a dual system, some anglophone parents who wanted their children exposed to French were upset.

Carrier pointed to research showing that francophone children in bilingual settings often end up speaking English and can lose their mother tongue.

The committee of MLAs that reviewed the act agreed with him and recommended daycares be brought under the Education Act, but added “a reasonable transition period” is necessary.

Friday’s legislation does not include a clause on daycares, though government officials said there could be amendments to the Education Act in the future.