The province’s attorney general is rejecting the idea he must stay neutral in a controversial dual school bus case and says the province’s top court should instead appoint a “friend of the court” to argue against the dual system.

The province also says it should not have to pay the legal fees of citizens and groups who intervene in the constitutional reference case before the Court of Appeal.

Those arguments are contained in the province’s filing that answers several procedural questions raised by Chief Justice Ernest Drapeau during a hearing in February.

The Liberal government has asked the court to rule on whether language-equality sections of the Charter of Rights and Freedoms require the province to have two school-bus systems, one for English schools and one for French.

The substance of the case won’t be heard before this fall at the earliest.

But at February’s hearing, Drapeau said he wanted the province to respond to several concerns he had about the process.

He suggested that because the attorney general is supposed to be the province’s top legal officer and independent from political considerations, the court may decide he is “duty-bound to present all arguments, both pro and con.”

‘Friend of the court’ needed

But in a 20-page brief filed by lawyer André Richard, the province argues against that. 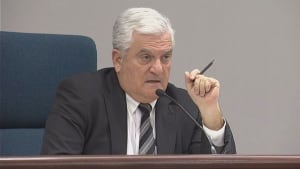 Chief Justice Ernest Drapeau said in February he wants to ensure that the hearing is credible, which may require the province funding every citizen or group that makes arguments. (CBC)

Requiring the attorney general to argue against the need for two bus systems would “force him to advance a position he believes to be unconstitutional,” which “would be contrary to his duty to uphold the law.”

“If there is a perspective not before the court, the proper approach is to appoint an amicus curiae [friend of the court], not to ask that the position be advanced by the attorney general,” the brief said.

A “friend of the court” is a lawyer designated by the court to make arguments that would not otherwise be heard.

Appeal courts often use them in constitutional reference cases.

The province says it would pay the legal bills for any lawyer appointed as a friend of the court.

But it says it is not obligated to pay the legal costs of all interveners in the case.

Drapeau said in February he wants to ensure that the hearing is credible, which may require the province funding every citizen or group that makes arguments.

But the province says interveners have no legal right to have their bills paid by the government, and argues it would be wrong for a court to tell the government how to spend money on the administration of justice.

Drapeau also asked in February if the law allowing references may itself be unconstitutional because of the way it is worded.

The law says the Court of Appeal has to hear cases the province considers “important,” and Drapeau said that might violate judicial independence by preventing the court from refusing to hear a reference case.

But the province’s brief says the court “retains full independence to hear, consider and answer” the question without interference from the government.

Two days of hearings on the procedural issues are scheduled for June 15 and 16. 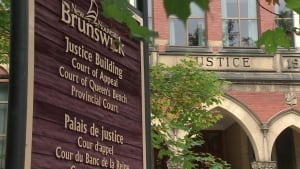 The Court of Appeal has set aside two days for hearings on procedural issues on June 15 and 16. (CBC)

The province’s filing also lays out a proposed schedule for the case, which would give the federal government four weeks to decide whether it wants to intervene in the case.

The proposed schedule would give the province eight weeks to finalize its arguments and serve it on other parties and interveners. Interveners and the lawyer chosen to act as a “friend of the court” would then have four weeks to file their responses.

The province’s three francophone school districts and a group representing francophone parents have applied to intervene in the case.

Mario Charlebois, a Moncton man whose constitutional challenge to unilingual municipal bylaws led to an overhaul of the Official Languages Act in 2002, is also applying to intervene. Charlebois is arguing the Court of Appeal shouldn’t hear the case.